My Review of Mirrycle Saturn Bell

This beautifully designed bell has a sound that fills space.

This bell has no parts that stick out that can get caught on things or broken. Its design is simple, sleek and would go with almost any bike. My handlebars are black and it really just blends right in. The bell's tone is loud and clear and cheery. At only $10, it really is a great buy.

Though some parts of LA have been really hot this weekend, here on the Westside it's been beautiful. My boyfriend and I took a ride to The Fisherman's Village in Marina Del Rey yesterday. We didn't know we were going there. We just wanted to go for a bike ride and that's where we ended up. 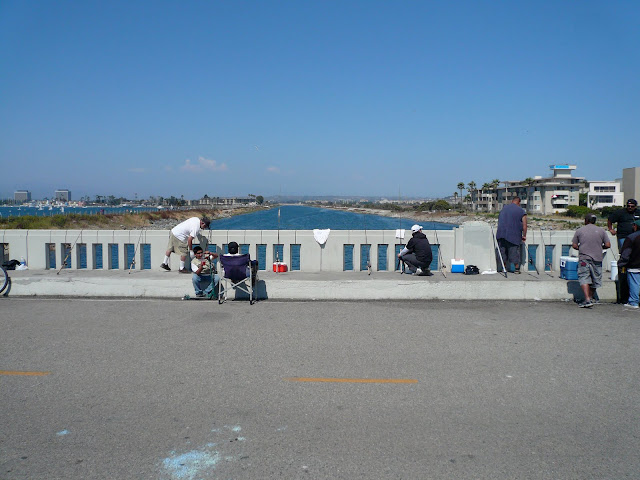 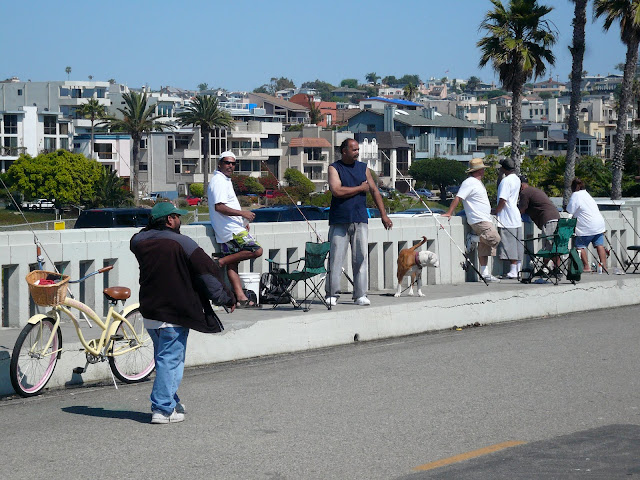 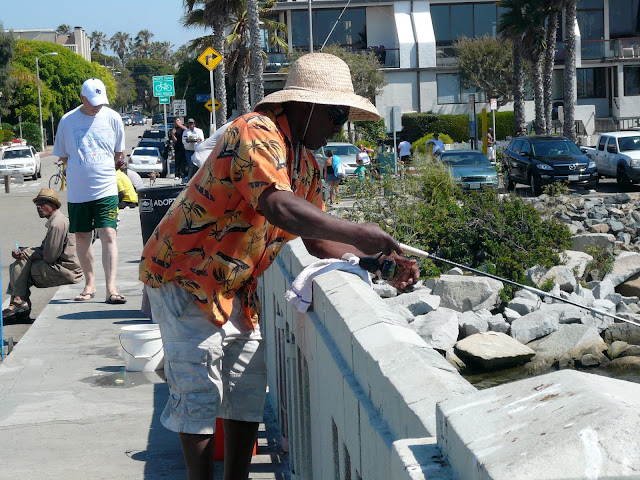 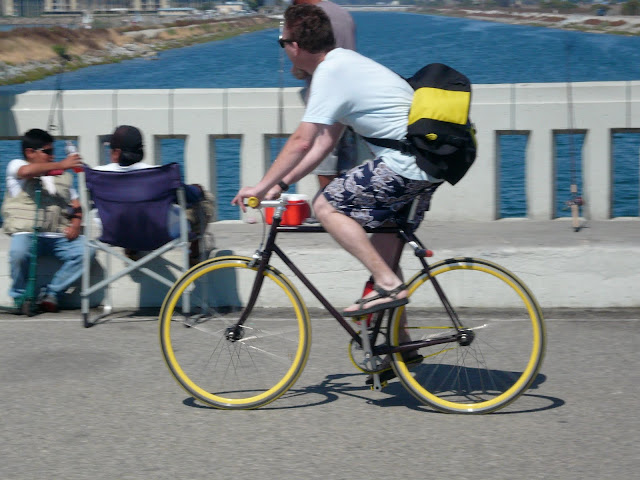 Fixies can enjoy the Marina too. 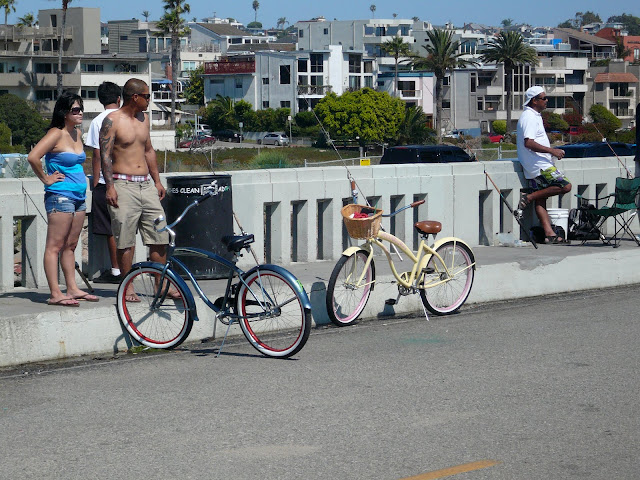 Beach cruisers. The most commonly seen bike in the area. 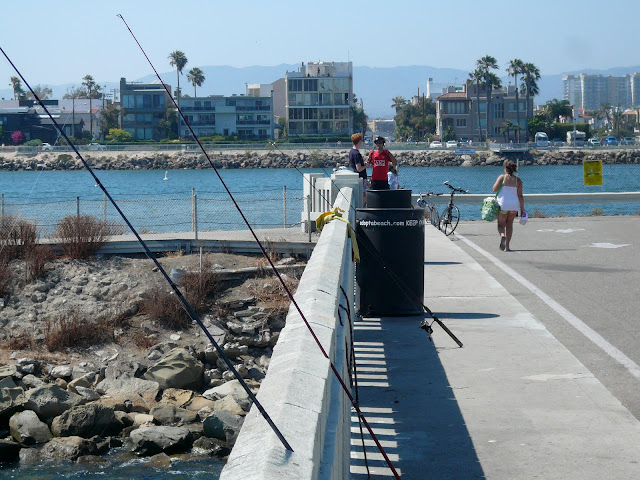 Fishing poles without their people. 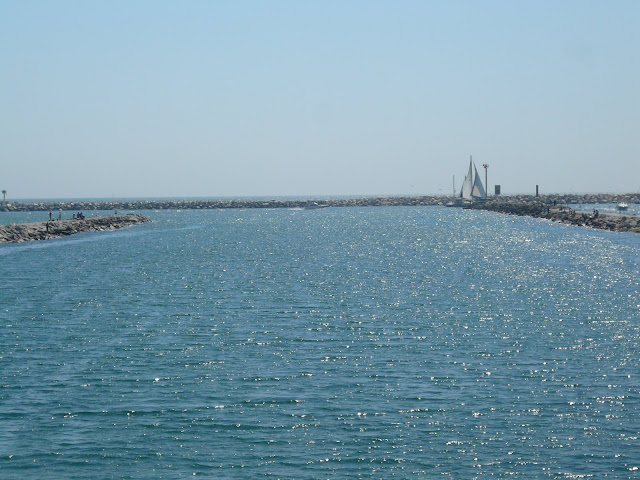 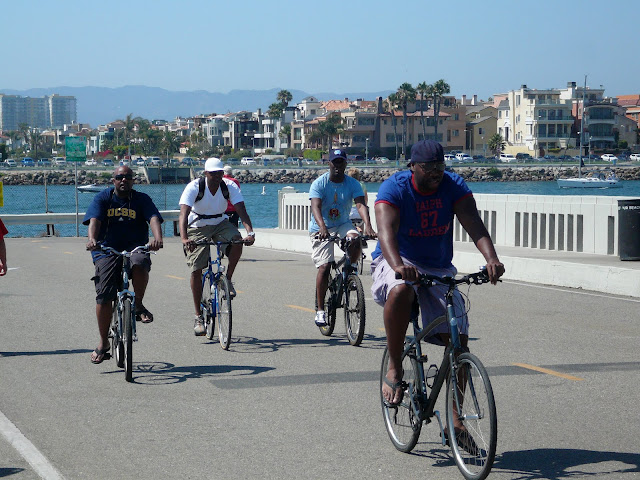 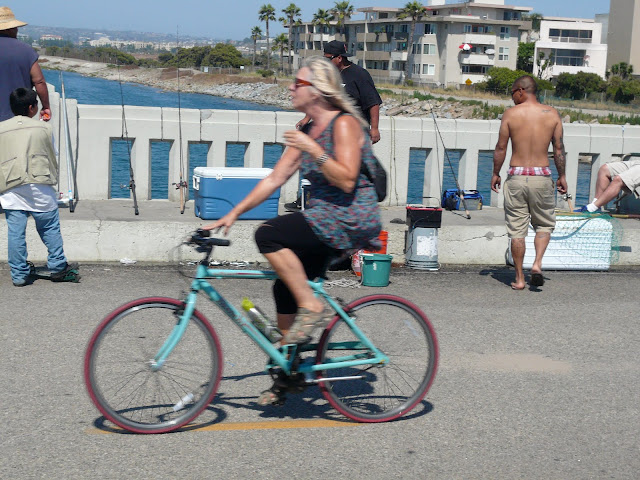 Sorry for the blurry shot - but she's on a Bianchi Milano so I had to include it! 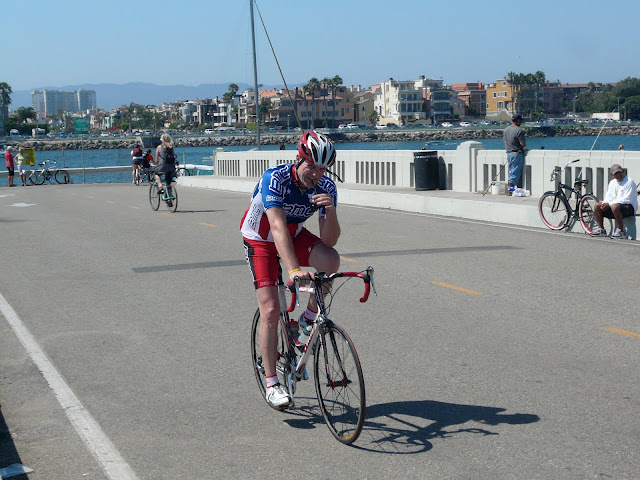 Gotta give the roadies some love too. 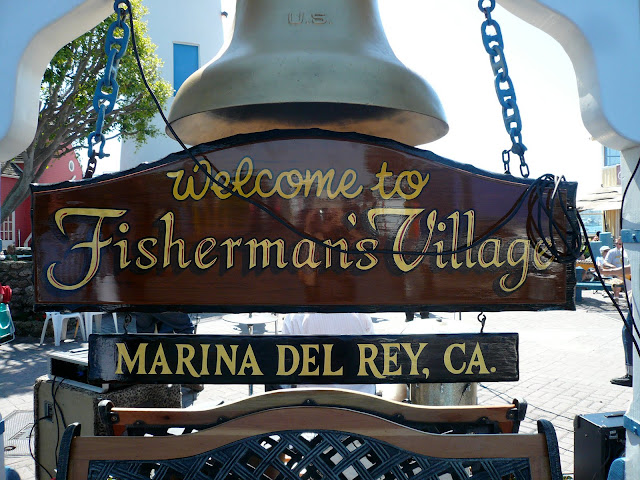 We turned back and made our way to the Fisherman's Village. 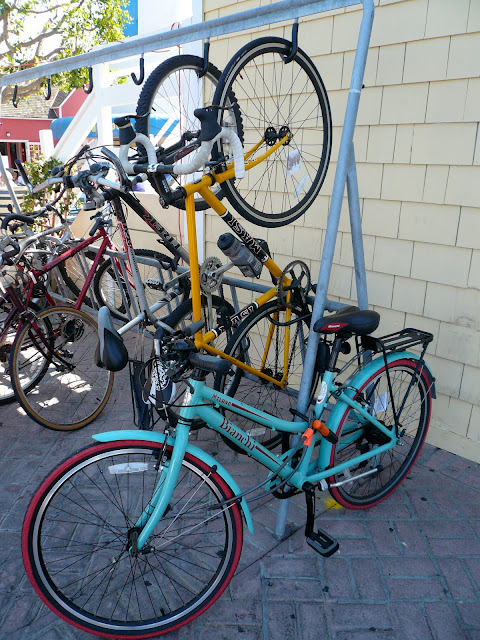 They had unusual bike racks. My Bianchi and my boyfriend's Masi locked up. 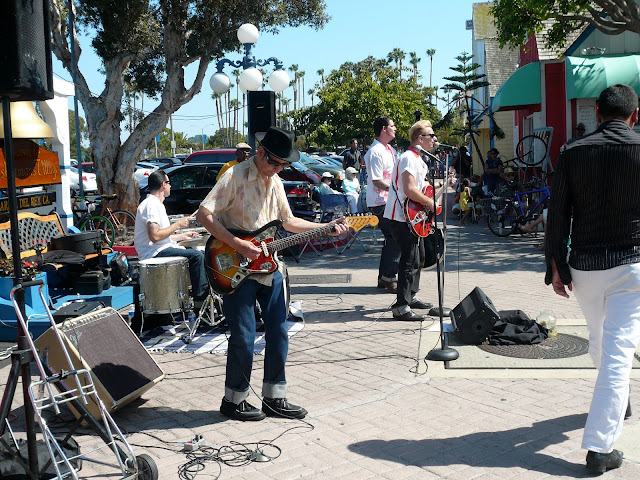 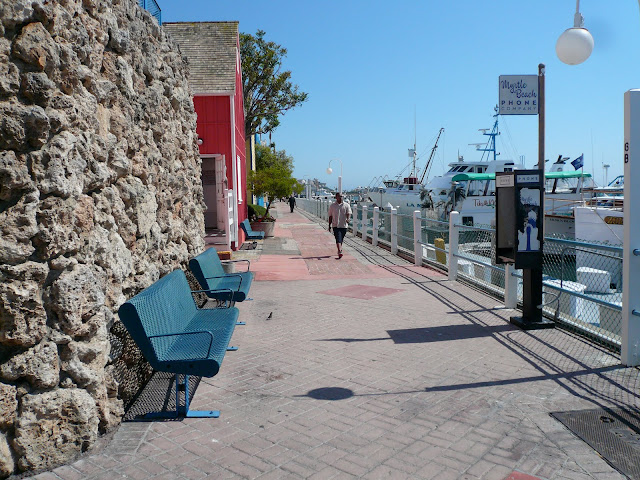 My parents used to bring us here when we were kids, but I'd never been back as an adult. 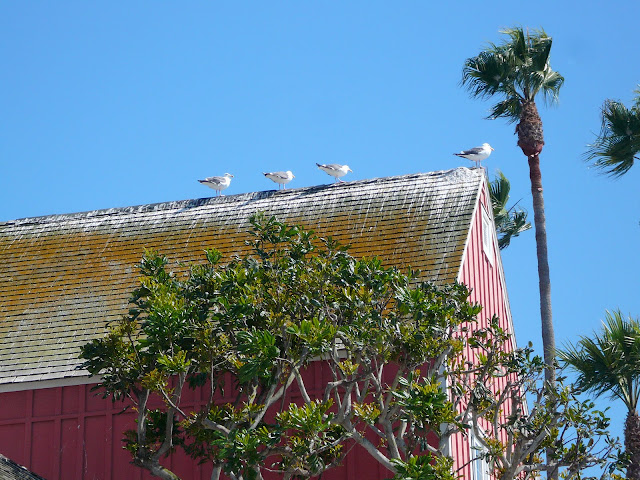 From the looks of it these guys spend a lot of time on that roof. 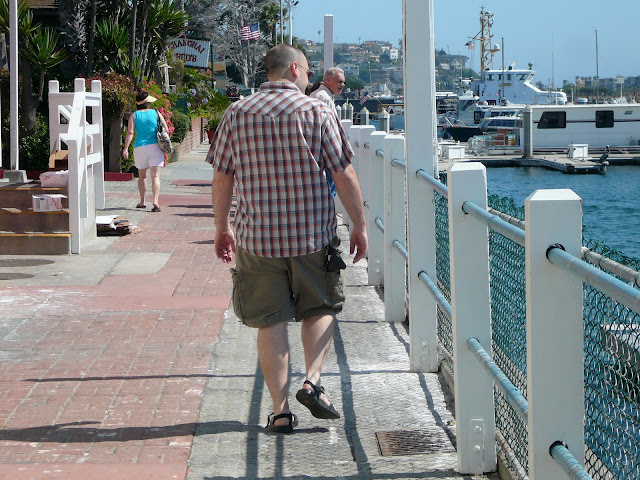 The beau.
It was a gorgeous day and a nice, relaxing ride. Ah Saturdays...doesn't get much better.
This post is an entry for the "Let's Go Ride a Bike" Summer Games. (New Territory - Explore a new part of town by bike.)
Posted by dreamlet at Monday, July 19, 2010 2 comments:

This is a belated 4th of July entry. On the 4th my friend Gigi and are were headed to a house party in Redondo Beach which is about 15 miles away from my house. I asked her if she had a bike because we could ride our bikes down the Marvin Braude Beach Bike Path almost the whole way. She said she didn't have a bike, but she'd been looking for one. A few hours later, because of the magic of craigslist, she had this sweet single speed Schwinn conversion! 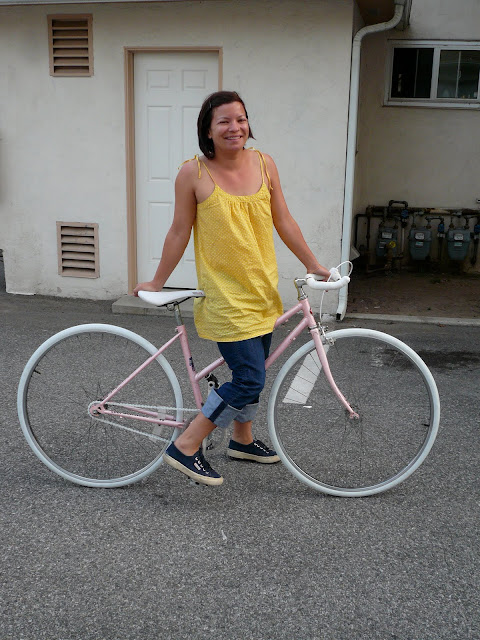 Isn't it the cutest bike ever?!
In college she used to ride a bike all the time out of necessity, but now she wants to ride for all the other reasons. We took the Ballona Creek Bike Path for part of the way, and then linked up with the Beach Bike Path. Most of the ride was during magic hour and dusk and it was really beautiful. 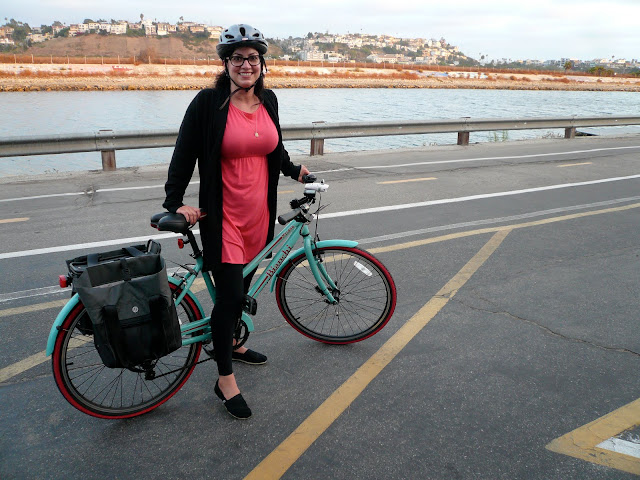 Ballona Creek Bike Path
The beach bike path was packed with pedestrians so it made the bike ride quite challenging and slow going, but in a couple of hours we were there and we rode by a park just in time to sit down and watch the fireworks show. 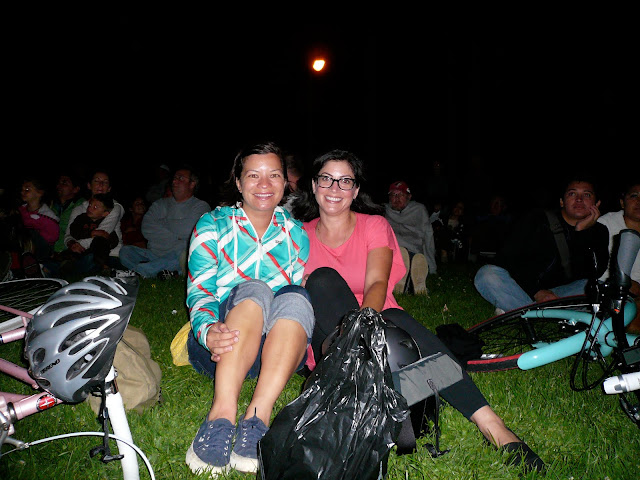 Enjoying the fireworks show at a Redondo Beach Park.
After that we headed to the house party. Everyone thought we were a little nuts for riding our bikes that far but we chose to think it was the good kind of nuts. Some time after midnight we set out for the 15 mile ride back home. At that time of night the beach bike path was a lot less crowded with people, but the degree of drunkenness of the people who were out was a lot higher, so it was still a challenge. We got home late, we were tired, but we were exhilarated.
I'd actually never been to Redondo Beach, so that was a new experience for me. Also, 30 miles is the most I've ever ridden in a single day. It was a day of firsts!
I'm so glad Gigi has her great new bike, and I look forward to many more rides together! 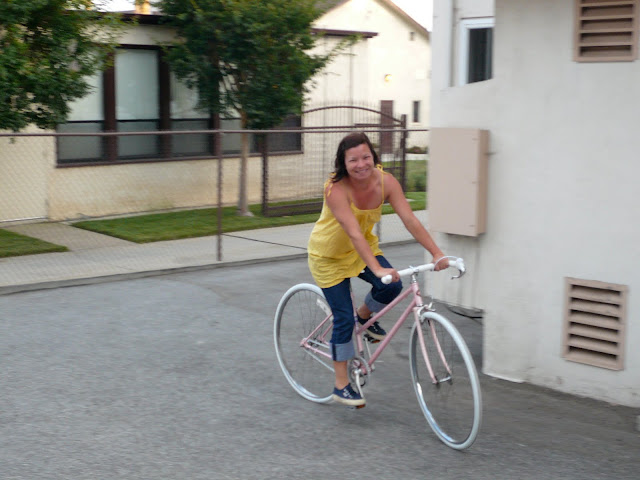 A bonus shot of Gigi and her bike. A little blurry but she looks so happy!
This post is an entry for the "Let's Go Ride a Bike" Summer Games. (New Territory - Explore a new part of town by bike.)
Posted by dreamlet at Sunday, July 11, 2010 4 comments: 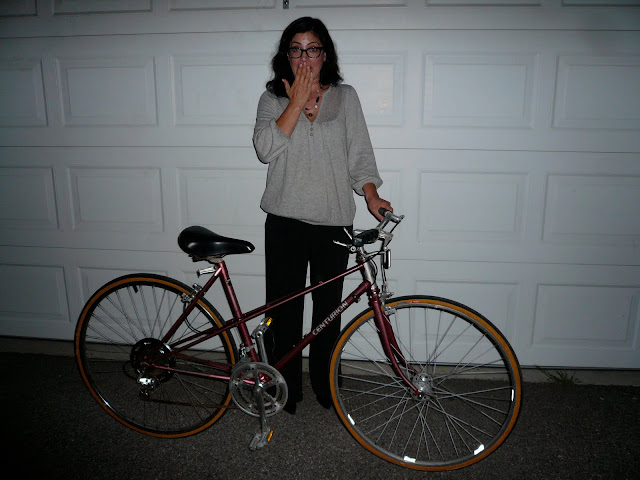 I bought another bike!  I've been looking for a vintage mixte that is a bit of a fixer upper. I'd like to repair it, replace some components, and generally use it as a training ground to learn about bicycle repair and maintenance. After months of browsing Craigslist, I came across this beauty last night. Tonight after work I took the plunge and drove 70 miles (each way) to get it. I don't know much about it yet except that it's a Centurion LeMans - maybe from the early 80's? I'll post more pictures and close ups this weekend. I'll be posting updates as I fix her up! 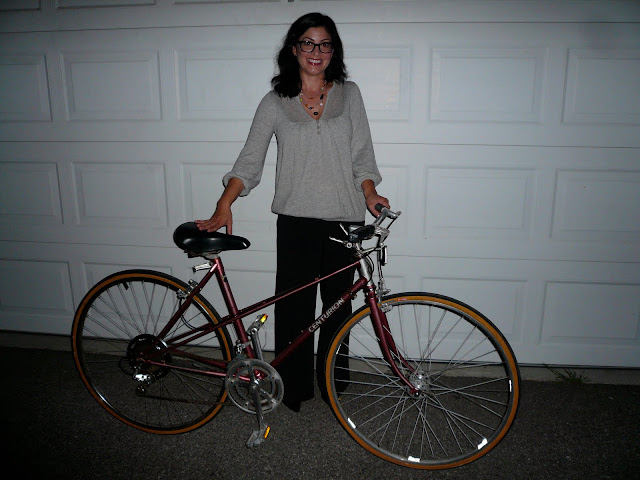 Cargo bikes really are kind of miraculous. I just took a trip to Palm Coast, Florida to relax with some friends who were renting a house there. We took a boat trip to neighboring St. Augustine, the oldest city in the United States, I'm told.

There I saw this artist selling his paintings in the town square. His many paintings were propped up against his awesome cargo bike! When I asked him about his bike, he told me it was the glue that held his business together. The city started charging for parking and it became too expensive for him to drive his car so he got this bike. (Okay I know it's actually a trike but in the interest of simplicity I'll just call it a bike.) 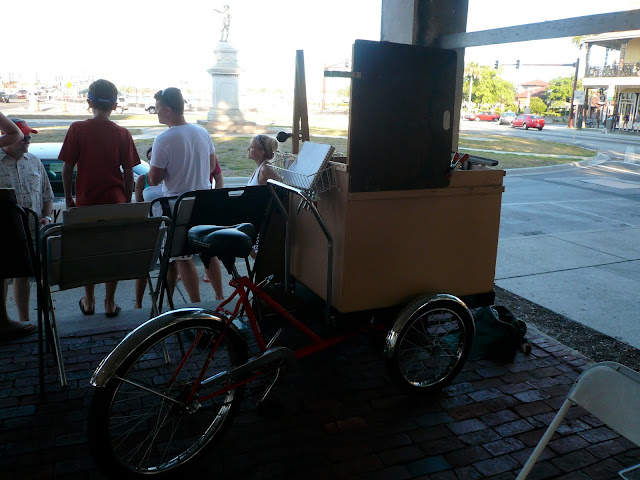 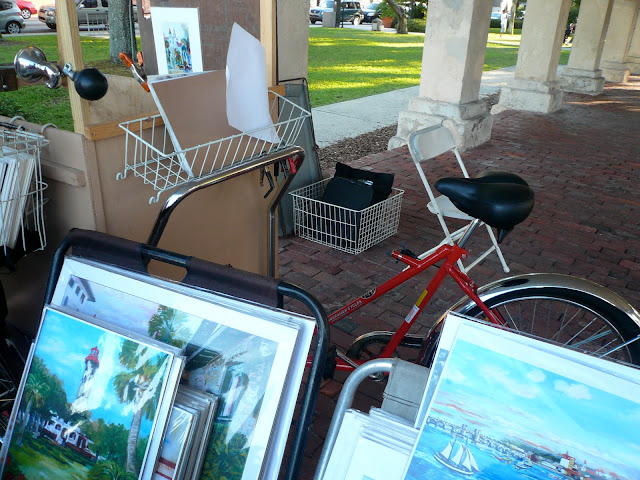 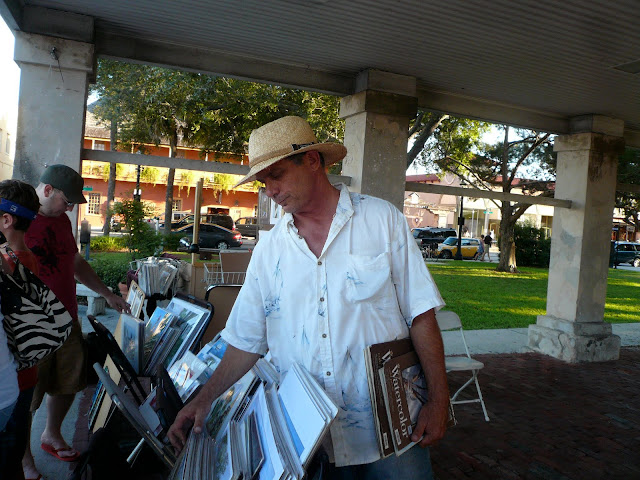 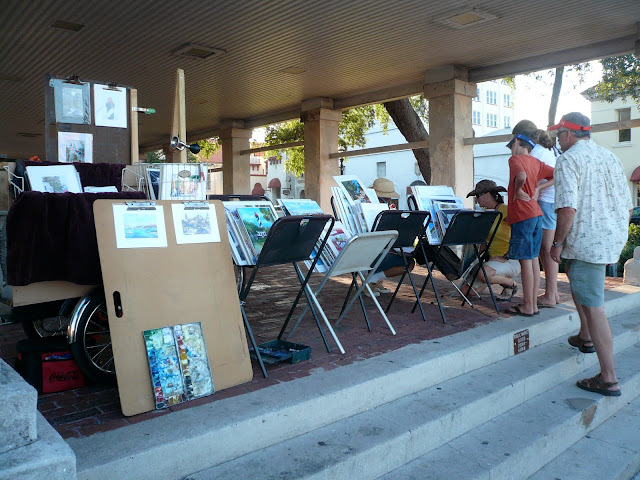 Look at all the stuff he fits on that bike! 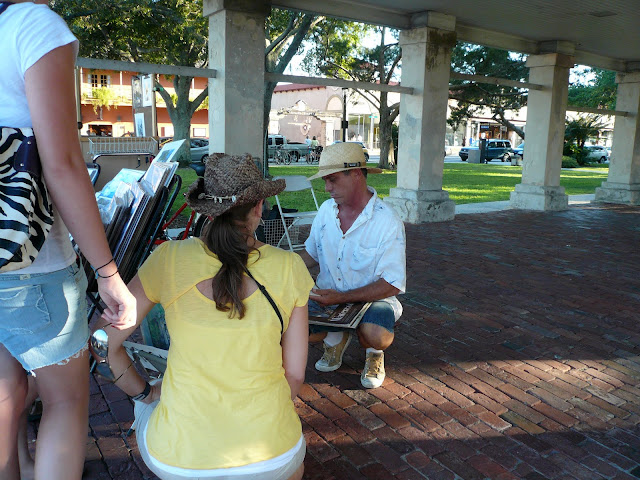 Eager customers.
The artist was actually quite busy helping a bunch of customers so I didn't want to take up any more of his time with my bike questions, though I had lots. I think he's a wonderful example of someone who found a creative solution to a problem and makes his bike work for him. And he has a rockin' bike!
Eagle-eyed readers may have noticed that the bike is by Worksman Cycles. They are the original creators of the Good Humor Ice Cream Tricycle, and the oldest existing bicycle manufacturer in America! I think his model is at the top of this page. Unlike a Dutch Bakfiets bike where the cargo box is built in, this bike simply give you a platform on which to put your own box or other cargo. Its payload capacity is a whopping quarter ton! Worksman Cycles are made in the USA. I'm not aware of any other cargo bikes that are. (If you know of any please leave a comment.) Take a moment to read the company's essay on why they continue to build their bikes in New York.
Posted by dreamlet at Saturday, July 03, 2010 4 comments: